skip to main | skip to sidebar

Continuing tonight's 'Pillars' theme (this could go on for a while, y'know...) A second route, a Monday night run to bag another urban trig pillar. 9.1km, 59mins. Would have been quicker but for the horrendous blisters my shoes are inflicting on me, despite tape and two pairs of socks. New shoes to come in the not-too-distant future, methinks... Still, an enjoyable hour on a beautiful spring evening. Long may it last!

Posted by Carrick 'Pyro' Armer at 1:46 PM No comments:

I've been trying to take some inspiration, and some motivation, from others recently. Sometimes it's nice to take a others ideas and see how you can twist them to fit yourself and your own goals and aims. Sometimes they're profitable, sometimes not, but like most things, they're usually worth a go.

The latest one is thus: The German posted an article to his blog a while back about a mission to collect trig pillars in his local area - for those who aren't familiar with these (shame on you) they're concrete pillars used by the Ordnance Survey to base their theodolites on when surveying the UK. In the days of aerial cartography they might be more-or-less redundant, but they're still around, marking what is often the end of a laborious climb, a stopping point for hillwalkers everywhere, and a convenient amusement to stand on top of and pretend to be the Statue of Liberty. Anyway, the key to Graham's little mission, and to this one of mine, is that these concrete lumps are sited on the top of hills all over the place, be that out in the wilds of Knoydart or the comfort of leafy suburbia. It may not even be that big a hill.

I'd been scanning Memory Map for some trails to ride to make a Saturday a little more entertaining. I was crashing at Dave from Extreme Care's place on the Friday night and leaving my car there, with the aim of getting a longer ride in and stretching the legs a bit. There were a multitude of options, south to Castleford and along the canal was one, north and round the ring-road another, but then Graham's post came to mind and I started looking for the little blue triangle-and-dot symbol, spotting one, then another, and another... etc. In the end, I had a likely route of 40km, mixing bridleway, byway and country road, taking in 8 pillars, ending with one right on a regular bike route (the Meanwood trail) which I'd never even noticed. There were a couple more not-too-far off-route for if I was having a really good day, and a multitude of escape routes in case of physical, mechanical or meteorological failure.

Rolling out from Sheepcoates Farm it was a fantastic day, warm and sunny, just the weather for shorts and a jersey. I'd packed my new race pack (Inov8 Race Pro 22) with gear, food and a pair of running shoes because not all of the pillars are on bridleways. I set off at a leisurely pace and soon had the first pillar bagged, next to a water tower not more than 5km from the start. I headed up through Garforth and along a familiar-ish bit of trail towards the M1. I say familiar-ish, last time I rode it it was a fun, twisty snake of woodland singletrack, whoopy territory with a large grin factor. Utterly dismayed this time round to find that it, along with another couple of favourite trail sections of mine, have had all the nice stuff JCB'd out and replaced with dull, uninspiring hardpack. Head-down mindless boogie.

That said, as I crossed the bridge over the motorway, I could see the grey-white lump of the next pillar, so a quick spin alongside the fence, then a short dash up a field edge and number 2 in the bag. A little more fun to come, descending the farm tracks I've night ridden so many times with Team Dogger, and up the hill alongside the woods, scene of a first proper night ride so many years ago. A quick dash over the field and that's three! I'd been riding gently for a couple of hours, the sun was out, and it was a near-perfect day. If I could just stop my blinking saddle creaking, it would be perfect...

Sadly, the creaking saddle put a premature end to my day. I'd continued, through Barwick-in-Elmet, up across the A64 and up the edge of Whittle Carr wood to nip across the fields once more (up a footpath this time) and grab number four, half way in terms of pillars, but just shy in distance. I headed back out onto the bridleway, onto the road again and stopped in Thorner to have a wee bit of food and a look at that seatpost. Looks like the clamp's a wee bit loose. I'll just nip the bolt up a touch. Nip, nip... Boink.

Sadly, the bolt was more seized than it first appeared, and those two little nips sheared it. 19-and-a-bit km in and it was completely shot. Dammit.

Since I ride a relatively small frame, with a severely sloping top tube, there would be absolutely no way to ride this one back. Standing for the distance I still had to go was going to brutalise my thighs beyond comparison. The nearest station was still a long way away and buses won't take bikes. I called for reinforcements, strapped on the running shoes and pushed to the Red Bus Cafe on the A64 to await uplift.

Looking on the bright side, despite the premature end to it I had a great days solo riding, and I've got another loop to concoct to get in the other four of this one, before I start plotting the next batch (okay, too late, I've already started, but you get the idea.) And a little ticking of pillars could go along way towards some of my aims... 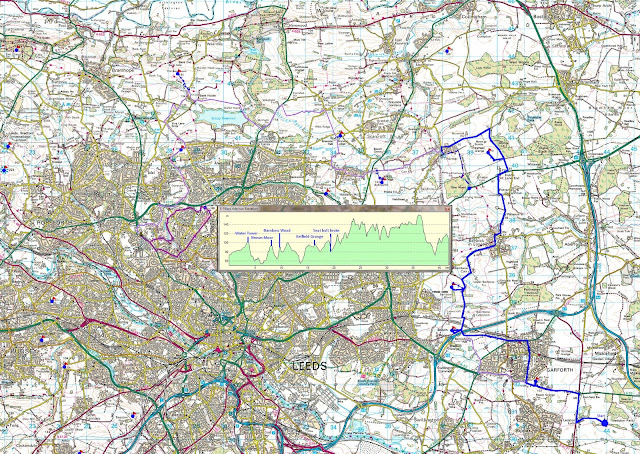 I'd written out a nice cheerful blog, about how I've lost weight, caught up with old friends and sorted some bits of my life out over the Easter weekend. I'm not going to post it because, frankly, right at the moment it seems like the wrong thing to do.

Why? Because on Tuesday I got a call to tell me that one of the girls from the Leeds Uni Canoe club, with whom I and many others had paddled, drunk and partied, had been involved in an incident on the River Coe in Scotland, and had sadly passed away.

I'm not going to go into details, there's no need. It's a tragedy whenever someone young dies, and made more so when it's someone you know, someone who was popular, ever-cheerful, and full of potential. She was a very promising paddler and loved pushing herself and others to fulfil their aims and ideals. Amongst the club, her family and her friends, there are a lot of people now torn apart and trying to deal with a person-shaped void which will not go away, but given time and support, will hopefully begin to heal. 'Sorely missed' is a chronic understatement.

Rest in peace Emily.
Posted by Carrick 'Pyro' Armer at 11:51 AM No comments:

Carrick 'Pyro' Armer
Adventure racer, incidental Ultra-runner, photojournalist, computer geek, firebreather, mountain biker, kayaker, tea drinker, cake eater, pie maker and all round friendly idiot, always ready with a cup of tea and a smile. Read the rest of the blog if you're trying to figure me out.